Bang Krachao, also known as Bangkok's "Green Lung" is a man-made island bordering most of metro Bangkok, though most people might not even know that it is there.

Though it is called the green lung, the name has nothing to do with its proximity to Bangkok's "heart." It is named the green lung because it actually looks like a human lung, as seen in this ariel view: The island itself, which is technically a part of the Phra Phadaeng district of Samut Prakan Province, is a protected green space that has been saved from development since it was first created. There are a few paved roads for cars on the island, but the best (and most common) way to explore is by walking on the series of raised concrete footpaths that are built through the jungle. But first, let's get to the island.

There are a couple of piers with regular ferry boats that serve the route between Bangkok and Bang Krachao by crossing the Chao Phraya River. These boats are often used by commuters and tourists alike and are usually packed full of motorcycles. The ride over to Bang Krachao from "the mainland" is cheap and quick. Once on the island, visitors can rent a cruiser bike and spend the day visiting the various markets and local restaurants, and a variety of parks and temples.

One of the more noteworthy parks is called Sri Nakhon Khuean Khan Park And Botanical Garden, which is well-known for its shady paths for running as well as the observation tower, which many visitors climb in the afternoon for birdwatching. If you have a bicycle and want to get a spectacular nighttime view, ride over to the Bhumibol 1 Bridge just before the sunset and watch the lights on the bridge get turned on. You can view it by entering Lat Pho Park, a newly-renovated park just under the bridge's entrance. 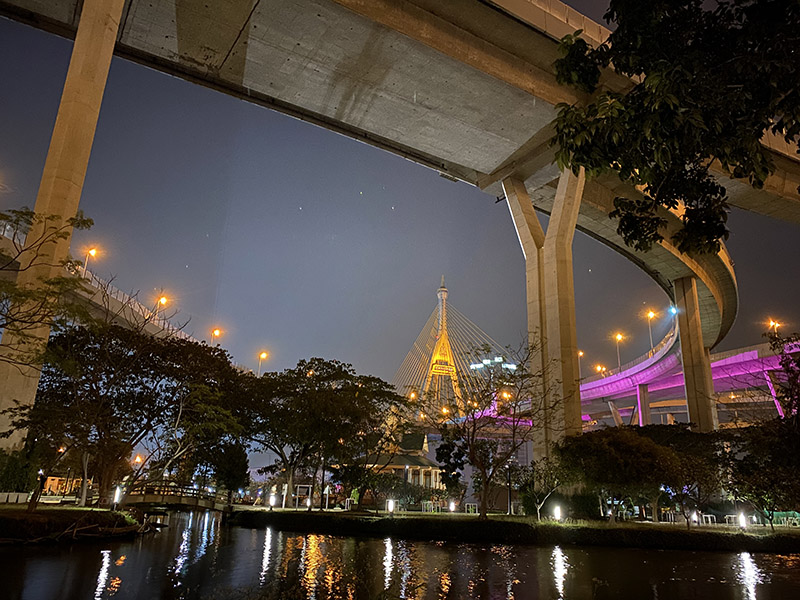 Bangkok Tree House is a lovely homestay located about a 15-minute walk from the pier at Wat Bang Nam Phueng Nok. The hotel is eco-friendly, meaning that they participate in saving the planet in a variety of ways. They offer special discounts for locals and visitors who choose to take a "mobile detox" while staying there. You can reserve space at the hotel here: https://www.bangkoktreehouse.com/.
Submitted on 27 August 2020
By TAT Newsroom
All entries