Spooky with charm: Phae Mueang Phi Forest Park
Is it possible to be spooky as well as charming? Usually, this would be an impressive feat. However..

Is it possible to be spooky as well as charming? Usually, this would be an impressive feat. However, there is a place in Phrae province that encapsulates both feelings.

Known as Phae Mueang Phi Forest Park, or locally as the "ghost forest", this desert-like "forest" on the outskirts of Phrae town is unlike any other ecosystem in Thailand. Though there is sand - a lot of it, actually - there is no sea. In fact, it's a lot more like a desert, and even though it is called a forest, there are actually very few trees in the park. Instead, there are a variety of limestone rock formations formed over hundreds of years of rainwater runoff flowing through the park.

This park is called the ghost forest because long ago, according to locals, a villager went into the woods looking for bamboo shoots to cook with, and had a spooky struggle while trying to return home.

Rumor has it that as she was leaving she came across an abundance of silver and gold, and in an attempt to carry her new-found riches with her, was stopped by supernatural beings. No matter how hard she tried to get out of the forest, the “protectors” of the forest (and it's resources) would not allow for her to leave with the loot. So, she was forced  to leave the forest without the treasure. 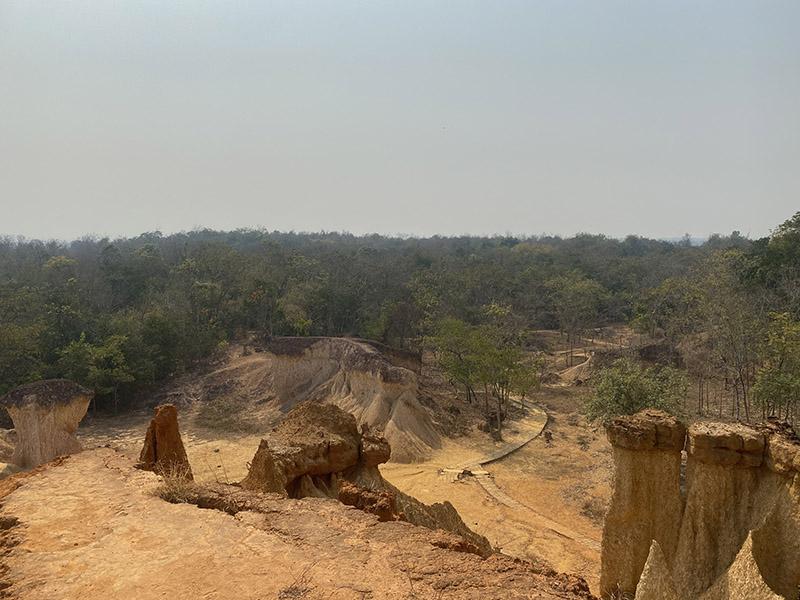 Upon returning to the village, she told the people what had happened to her, and everyone was in disbelief. They thought that they'd be able to carry the riches out of the forest with extra strength. So, together with the woman, they went back into the forest only to find that the silver and gold were no longer there. They searched endlessly for it, but it was never found again.

And so, the forest got its name: Phae Mueang Phi, or "the forest of the city of ghosts." in the Thai Language.

The park has a few walking trails and plenty of wonderful photo opportunities that are sure to shock anyone that has been to Thailand before, as it is truly a one-of-a-kind location that looks nothing like the lush forests and endless seas that people are accustomed to seeing when they consider destinations in Thailand.